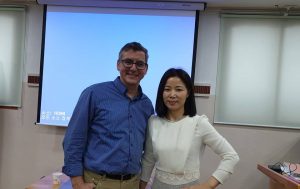 This April 2019, Dr. Robert Fox, was invited to travel to the country of South Korea to provide education on vision therapy to Korean optometrists. Leaving directly from his annual meeting of the College of Optometrists in Vision Development (COVD), Dr. Fox traveled with the COVD-Korea delegation to Busan, Korea, about three hours south of Seoul. Quite the tiring trip, as it took him 24 hours of travel from door-to-door. The oceanfront city of Busan would serve as his home base for this exciting trip.

His first presentation took place in Daegu as a regional optometric meeting and optical trade show. There he presented a two hour lecture on advances in vision therapy to over 1000 attendees as one of the main, featured speakers. Thank goodness for Shin Hoy Sun! – She was his marvelous host and translator. Shin is the president of COVD-Korea and made all of his arrangements. She dedicates most of her time to growing vision therapy in Korea.

From there, Dr. Robert Fox and Shin Hoy Sun traveled back to Busan where Dr.Fox gave a two day course on syntonic phototherapy to 30 Korean vision therapy optometrists. Again, with Shin translating, this went very smoothly. He made many new friends who he looks forward to seeing  and working with again in the future.

Besides the lectures, Dr. Fox had a chance to tour the Busan region. This included visiting a Buddhist temple, shopping at a street market, and taking a cable car ride.  Dr. Fox said, “Korea is truly a beautiful country”.  He also had the chance to sample many new foods. Tasty beef, octopus, and sea weed dishes were amongst the many delicacies he had the opportunity to sample.

At the end of the week, he sadly bid his hosts good-bye.  Dr. Fox plans to return, someday, and visit this special country again.  Dr. Robert Fox is very appreciative of this amazing opportunity and looks forward to visiting Korea in the future.